Though the leaves are many, the root is one…

— WB Yeats, The Coming of Wisdom with Time 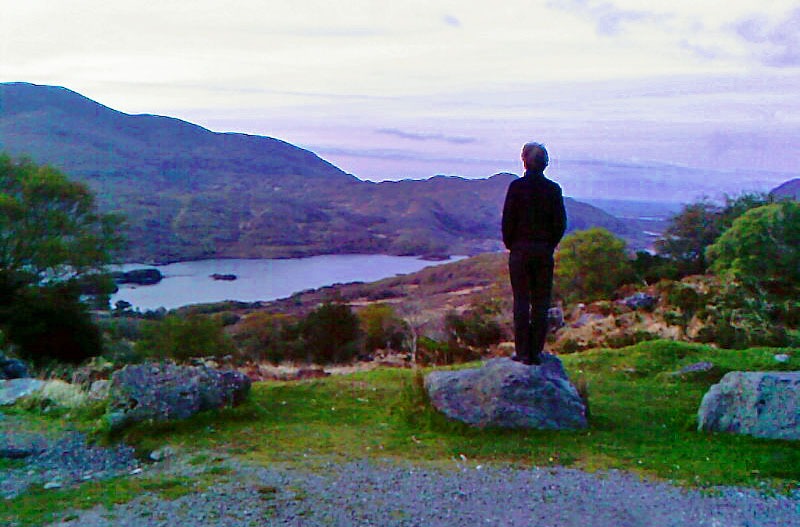 Poetry gives us a way to express the unsayable.

The alchemy of what occurs
Is inherently of you.
Beyond the frame of thinking
Is the transcendent view.

The roots of my poetry, like my art, are in Life. Poetry is another way to express and capture the insights and impressions that come at us at light speed out of the spinning galaxies of the mind. Whether I’m using the extreme compression of a short form, or a longer form to explore the workings of the mind, metaphoric language can carry a larger meaning. Like symbols in art, metaphor points at something greater.

What draws me to write is the impulse to transform the mundane into the extraordinary. How I bring transformation about is the definition of my character. If the art doesn’t transform into the universal, then the gravity of my character has stopped and that’s often where the ego comes in. Dissolving the ego brings clarity and intensity to transform beyond the personality.

In his poems we hear the muscular work of the different kinds of friction he brings to his art. 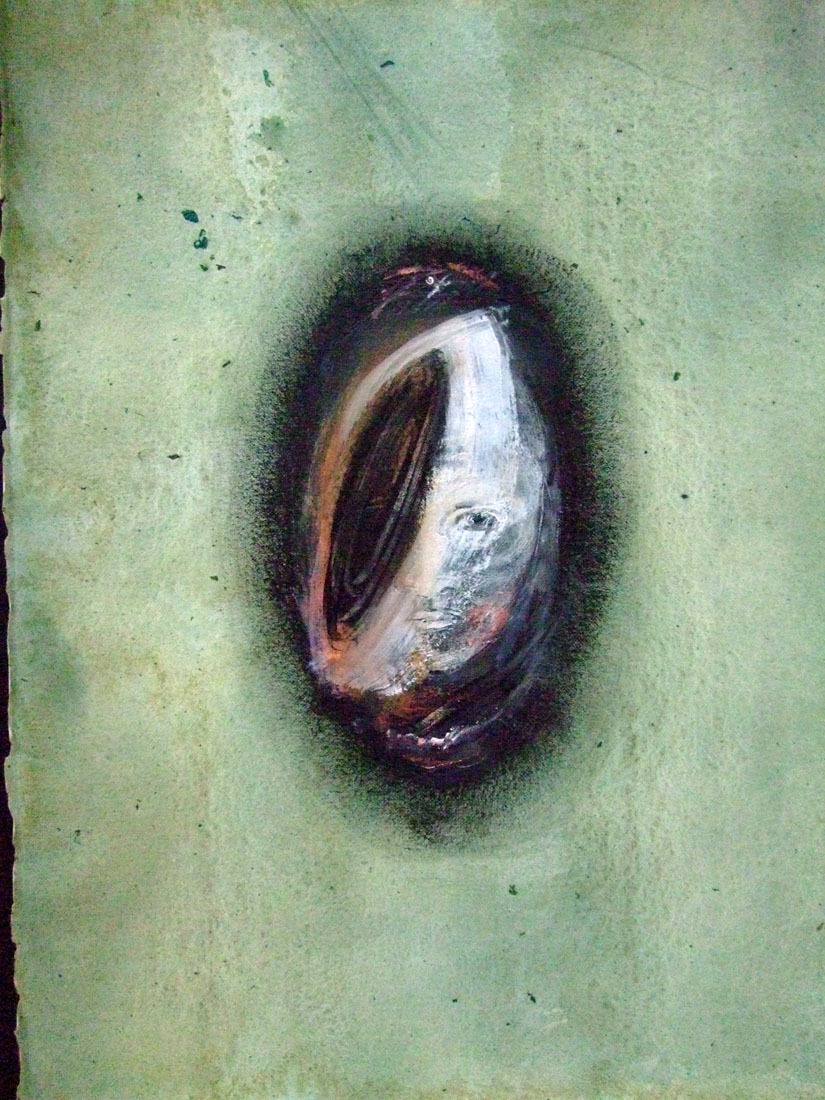 Tilting head, I wear you solemnly

As I learn to position perception

On the end of a light beam.

Tilting head, I wear you solemnly

As I learn to position perception

On the end of a light beam.

From a long reverie I have stepped into

In their design, with a pliability to wax and then

Wane, never the same, as the lunar stratagem

Patently confers, while lovers continue to be

Bearers of the steady gaze.

Even the given intensity of seeing fulfills

The dawn every morning, telling you

That you are the light of its preexisting songs.

Your solar eye shine is never not on.

Something occurred
Something gave way

To a heart space rise.
Something innate, infolding, realized

As the radiant eye shines back
Giving sight a magnitude alive.

Something occurred
Something gave way

To a heart space rise.
Something innate, infolding, realized

As the radiant eye shines back
Giving sight a magnitude alive.

Pith, nub, and a June bug on the thumb,
What bespeaks undisguised

Lashes to the duration to revive. What
Luminously gives way is to stay. 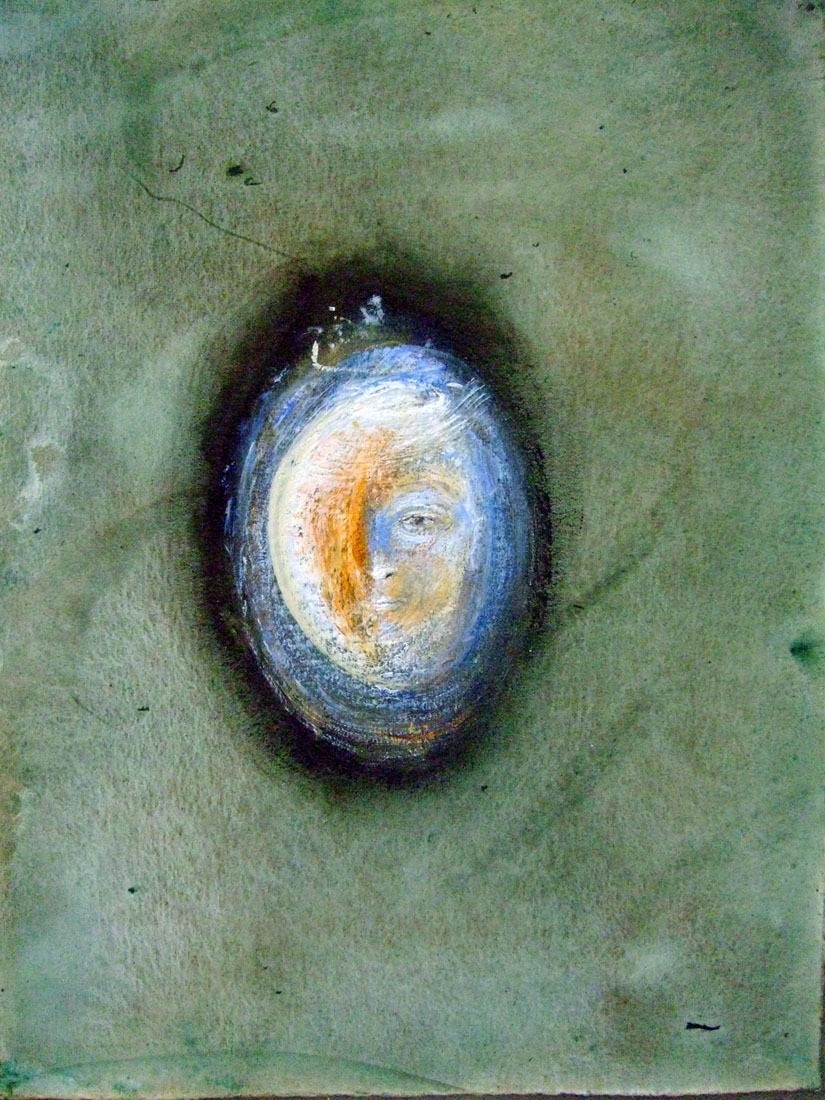 Why do you suppose mythmakers have wings?

Why do you suppose truth-speakers have no motive?

Breaking form, is it the metaphor that flies?

Why do you suppose mythmakers have wings?

Why do you suppose truth-speakers have no motive?

Breaking form, is it the metaphor that flies?

Sacred power signs, amorous arrows aim from within, to carry the within, without.

The experience you are already in is not just protoplasm, genetically a

To fully wear this body, do we not have to re-corporate back to the subject?

Bringing thought to its brink, are we just living off a portion to preoccupy?

I used to collect stones and walk the interstellar shoreline: worn sea iron

A lyrical rationalist crosses the divide. Stars hurl light years in front of my eyes.

Bodies on minds move past the diurnal clock.

Art revives immeasurable feelings from the ground of one’s being.

Mesmeric influences like wings motioning to inwardly rise, awaken beyond why.

Off your gravity’s feet, where inly experience is serenely deep.

If I Were an Oak

After walking for most of my life along the river paths

With so many powerfully still oaks, dilated in their treeness,

Seemingly receiving and conversing, in some primal language,

If I Were an Oak

After walking for most of my life along the river paths

With so many powerfully still oaks, dilated in their treeness,

Seemingly receiving and conversing, in some primal language,

Filling me with their ancient waiting, while the scintillating

Light is through the forest grove, shooting beams upon

The dream-worthy moment of my soul.

I asked myself, as I was now disarmed,

Speaking to an imaginary companion.

If I were an oak tree, how would I be?

I would have to be in one long rooted earth memory.

I would surely lose my ability to dance,

Or would I experience life in another invisible dimension,

Engaged within the cosmic play, preserved in one of life’s expressions?

For undeniably, the oaks have a persistent steadiness

And a beautiful way they resonate off the deep magnitude

Of murmurings, being wind bearers of Bardic songs.

And if I were an oak, I would imagine myself very old,

Boned by the thickness that is from a slow growth on time’s mind.

And I know I would be laden to alight on compassion,

After seeing so much redly blood flow and soak

Into the ashen soil from the world of suffering.

And I would feel too, heaven’s wave with so many

Births, heaving and sighing, in the likes of a new dawn smile,

Brightening off the very act of creation.

And I would delight with every season’s gift and quietly

Of forest creatures who distinguish themselves by their vibrato pitch.

To see deeper into wisdom’s containment,

Discovering that I am full of the luminescent oxygenated forces,

Ushering from the earth’s bowels to heart, to soul, ascending

And back again, in the sap marrow circulation, to restore by this iridescent flow.

That are heavy after struggling to hold centuries of calm

Against the roaring, misty and hypnotic power of the transparent wind.

And if I were an oak, my serrated hard skin would turn soft

After the moist festooned flowers surround my earth fiber skin,

Opening the pores to the sun, and the velvety lichen would be

And the hidden forces within become music braids to delight.

Retelling the story is within nature’s capacity to gracefully find the right blend.

Peacefully, a restorative greeting to a new language of rhythm.

And I would be welcoming the beauty of nature, motioning

Between the rings of time and spatial reshaping.

The organic kinship held in the buoyancy of wonder,

And the river along my stride meanders in its serpentine fashion,

While a slight tremor through my column of ease reawakens

The same genetic oak courage that was given

In the ancient tradition, to pass on as bravery to face the storms,

While the oldest memories can recharge my dream to a beyond.

And to think, I started out as a subtle dot, on an earth thought,

Before the seedling burst, piercing into spring’s spellbound reach.

Innocently, into a verve of unseen action, the bees begin.

And to learn as quickly as instinct drops the superficial attachments,

And autumn’s unfastening, unwrapping of the garment of leaves,

While the ring core inside is more for a bridgeable introspection.

While the quiet interlude to withdraw takes me back

To what portrays best the quality of the oak’s temperament,

To preserve this presence of endurance over the ingestion of centuries.

The honesty of inhabiting the true oak sincerity

Becomes what is sturdily wise. Abundantly strong, this song rises

And death releases from having once been a wild oak sapling,

To what steers on to be the elder tree overseer,

To the lifeline lineage that unerringly comes of itself,

Voicing its poetry in this acorn language of renewal.

And to spiritually commune, intoning the music from my own requiem

While the readiness to see death as life, lets the truncated column of old

Be felled respectfully, and ease into the clay of the earth.

And because I am love, and I can discriminate between these dark and light

Dance steps in life, and because I am of free will, I can at will, change the fated course

And better create a kinship with the positive forces, uplifting from the limited

And psychic patterns to a wholeness of being, seeing clearly through the heart wisdom.

I am free, luminously attuned, and so I can never be an oak tree.

So it is, from the bosom compass of the oak dwellers.

Druid means oak, and their seer wisdom is what inspired the conjuror in me,

To thread instantly, extracting the archetypal power signs thrust from the primal sphere,

Where the inborn height of the imagination is set free onto what is befitting. 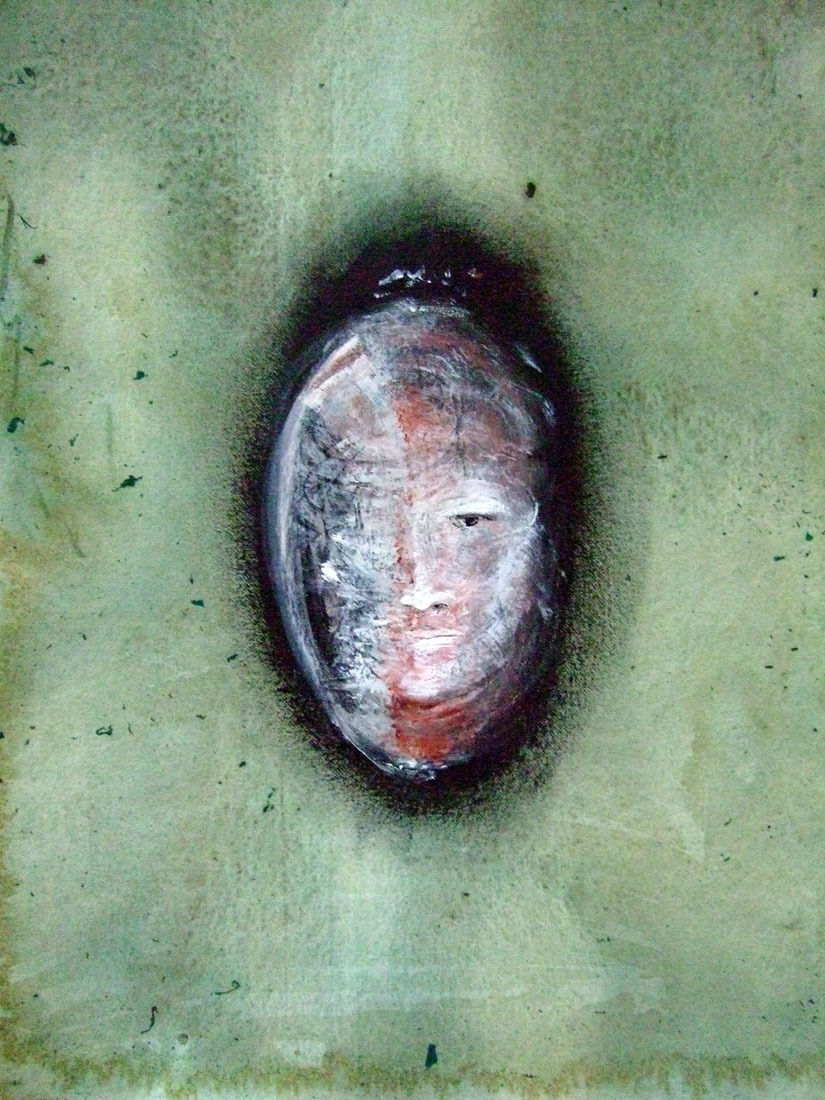 Your mind is such

Your mind is such

To the pure water

Dawn has no gravity.

I was tapped by a pollen hand

Dawn has no gravity.

I was tapped by a pollen hand

And I had no other instrument

To generate my response

Other than an Orphic lyre.

I began on an original driving force

To its own purposing ways.

I draw whorls, swirls and ellipsoid

Rings on the red clay floor.

They do not stay on the shore for long.

Back into the cosmic dark sea.

I eat the bread of the earth

Sit on the bloodstone seat

Playing the lyre, while interstellar

Night soothes my vast and deep.

Lovers too, whittle away the impediments

On the sheer act deftly at love's play.

Spheres orbit, not only for their own display. 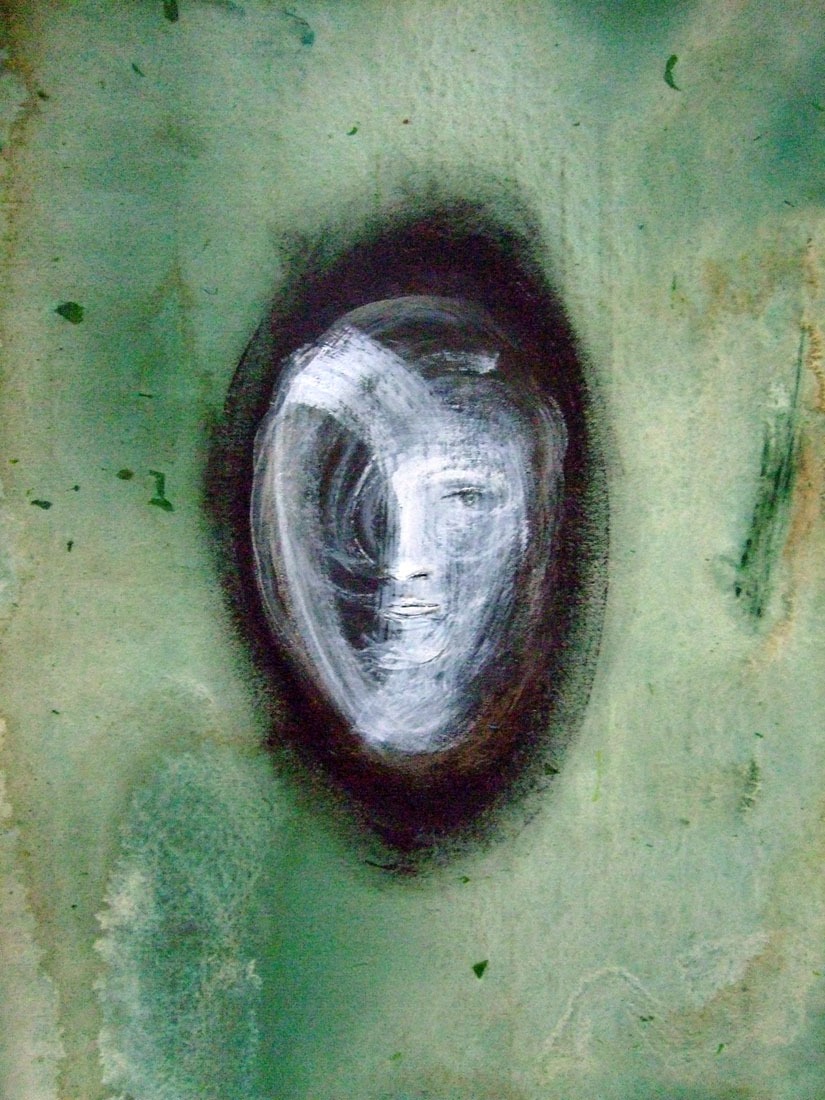 When I first walked on the rotation path,

It was night ravening the light.

Ferocious winds were howling as I skipped into myself,

When I first walked on the rotation path,

It was night ravening the light.

Ferocious winds were howling as I skipped into myself,

Listening to the earth drums, revealing the terra firma beat.

I saw her by the luna ray in swiftness of the night eye.

And as her form took on shape, whisking through a sonorous

Oblational ritual, striking a conductivity, it drew me into

An experience that immediately unset the linear's misnomer.

Her steps had reverence, embroidered into sharing a world

Of sorrow, and then, turning to express a world of joy,

Going from the deep below her feet to her gaze ascending.

Opting movement to its creative intent, these reenactments

Her wing of gesture was mythical.

I was now a witness to this rhythmic groove in a phantasmal exchange.

And as I grew older, as the years evolved from that magical night,

I was drawn to constantly look back, having never let go of vision's light.

Whirling from her luminous arc-guiding eyes,

I had kept the fertile, creative, renewing beauty alive. 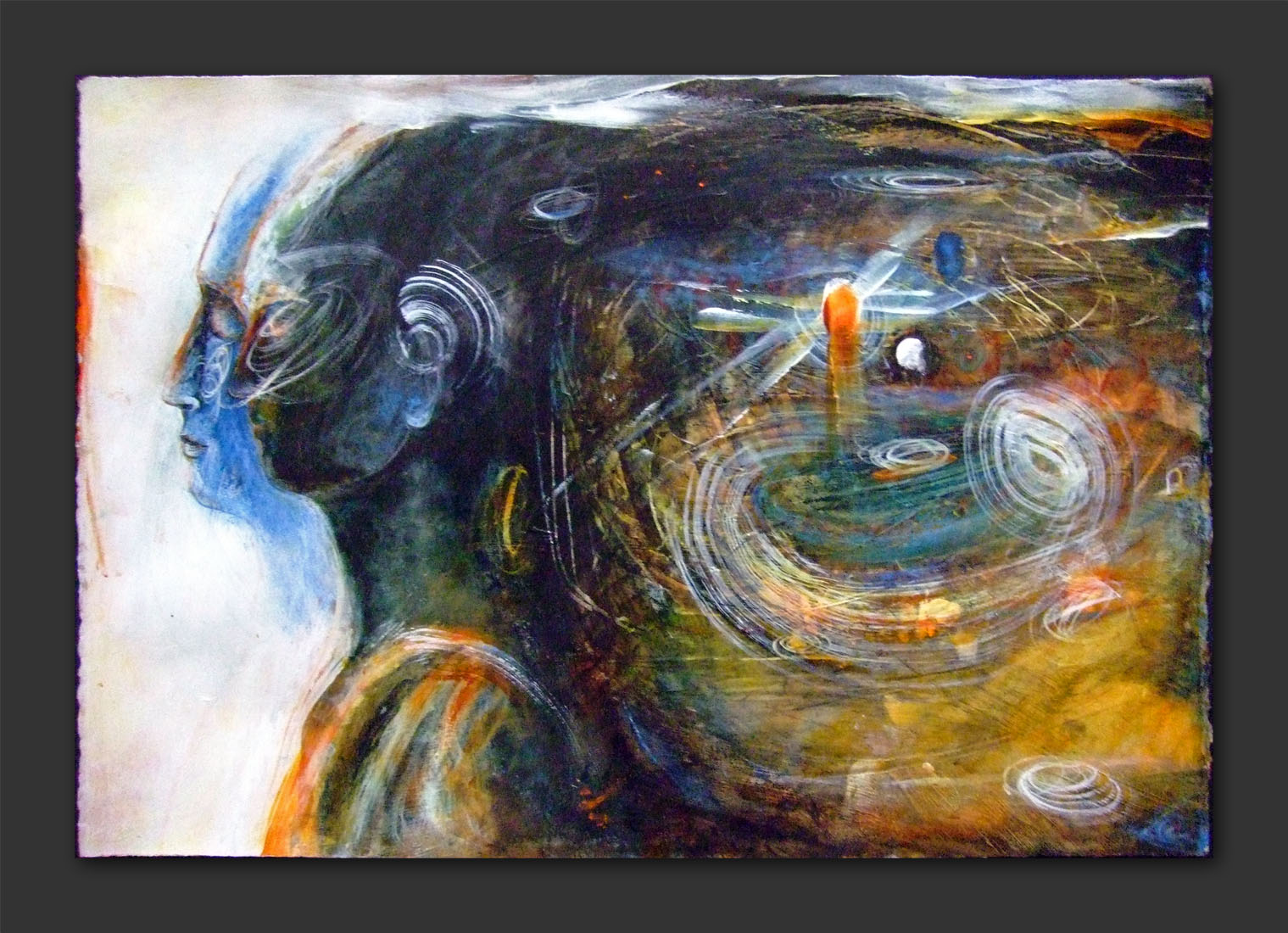 What happens may not seem part

Of the script. After the crescent slight of night,

What happens may not seem part

Of the script. After the crescent slight of night,

After the supine position is sent

On an upward dream

Roaming the planets in the porous mind.

After Neptune slipped in, Pluto had a slim say

With its oblong moons drifting chaotically.

The morning sun speared me to listen

To the audible bird songs.

Twelve winds sweep this story of its minor history.

The field of wheat and barley is outside my window.

The planting is on the waxing side of the moon.

What brought me to this poem is the infused delight

in kneading bread to bake for life. The song I sing

Is from the harvest of an invisible liberation. 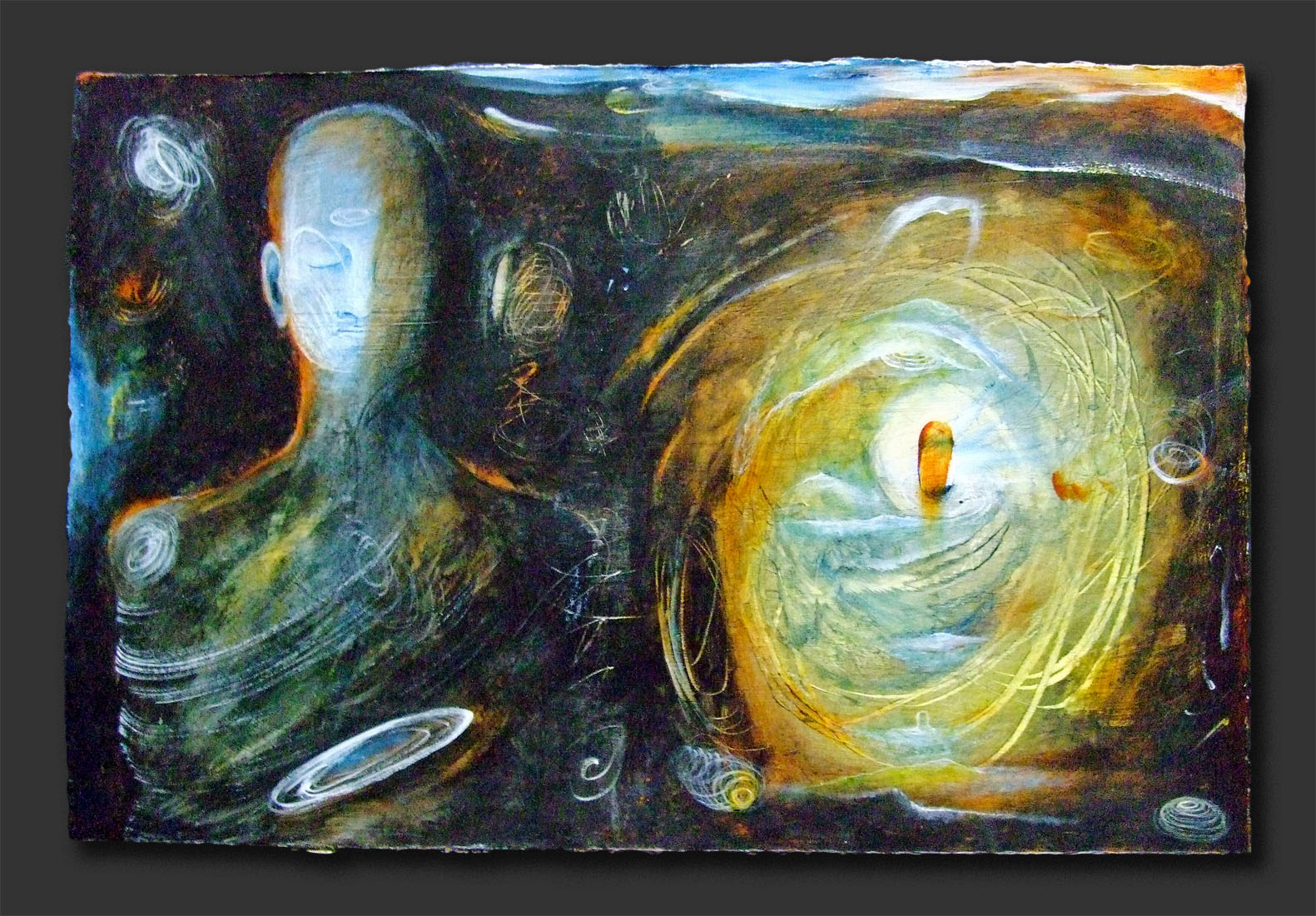 Having left the dusted

Earth feet to its time retreat,

Redrawn from the heart.

Nor do I sculpt
Form

When I feel growth
Come to be

I gather
My wits to see 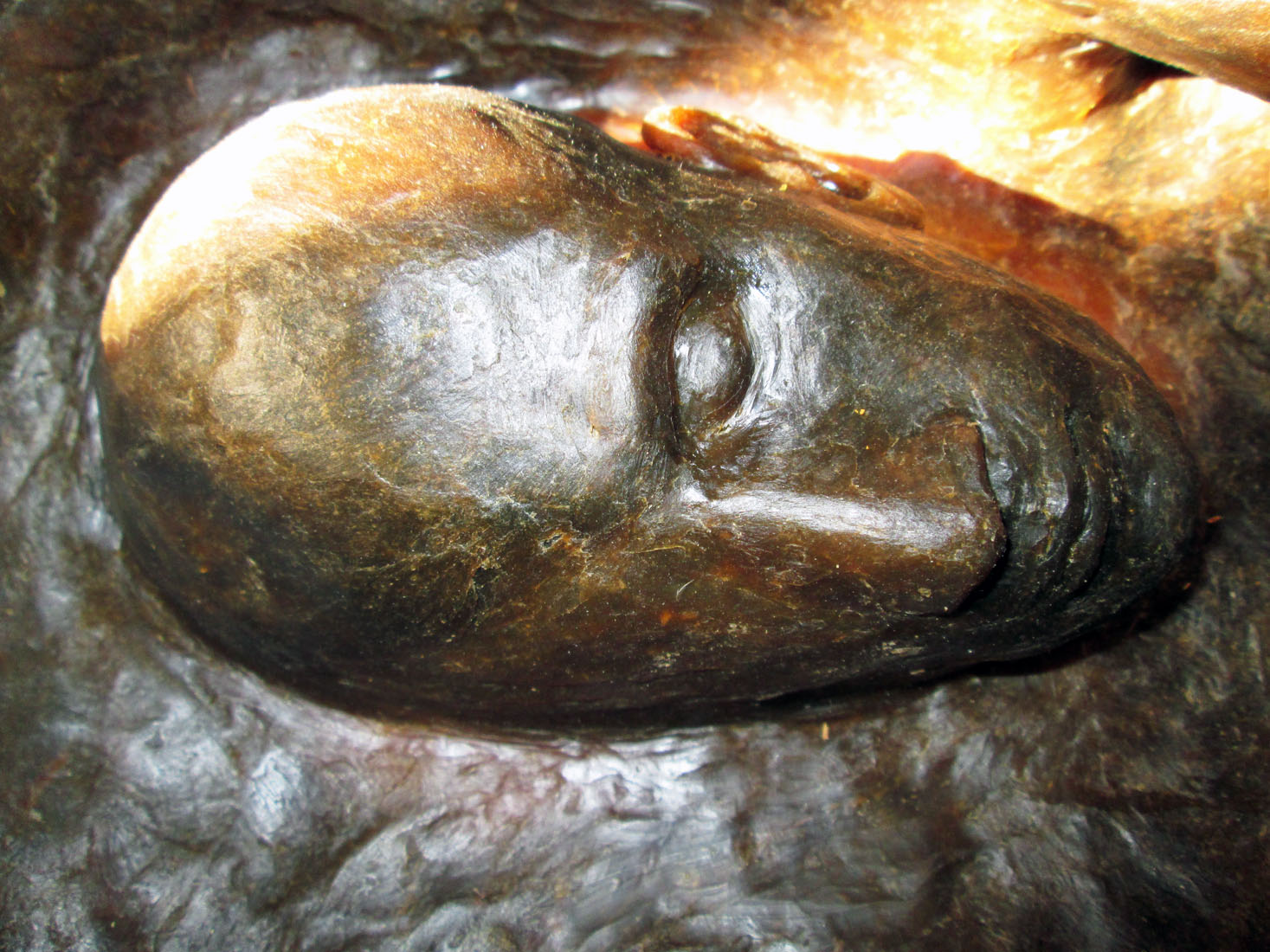 My planet head with

Bows to the knowing.

Lovelessness is not art.

The self evident affirms it.

Art is a provoker of beauty.

Beauty is a provoker of love.

Lovelessness is not art.

The self evident affirms it.

Art is a provoker of beauty.

Beauty is a provoker of love.

Art is a provoker of the inseparableness.

And whether you tremble with the compulsions,

Or you dance with a bear,

The heart's open enrapture gives no sign of despair.